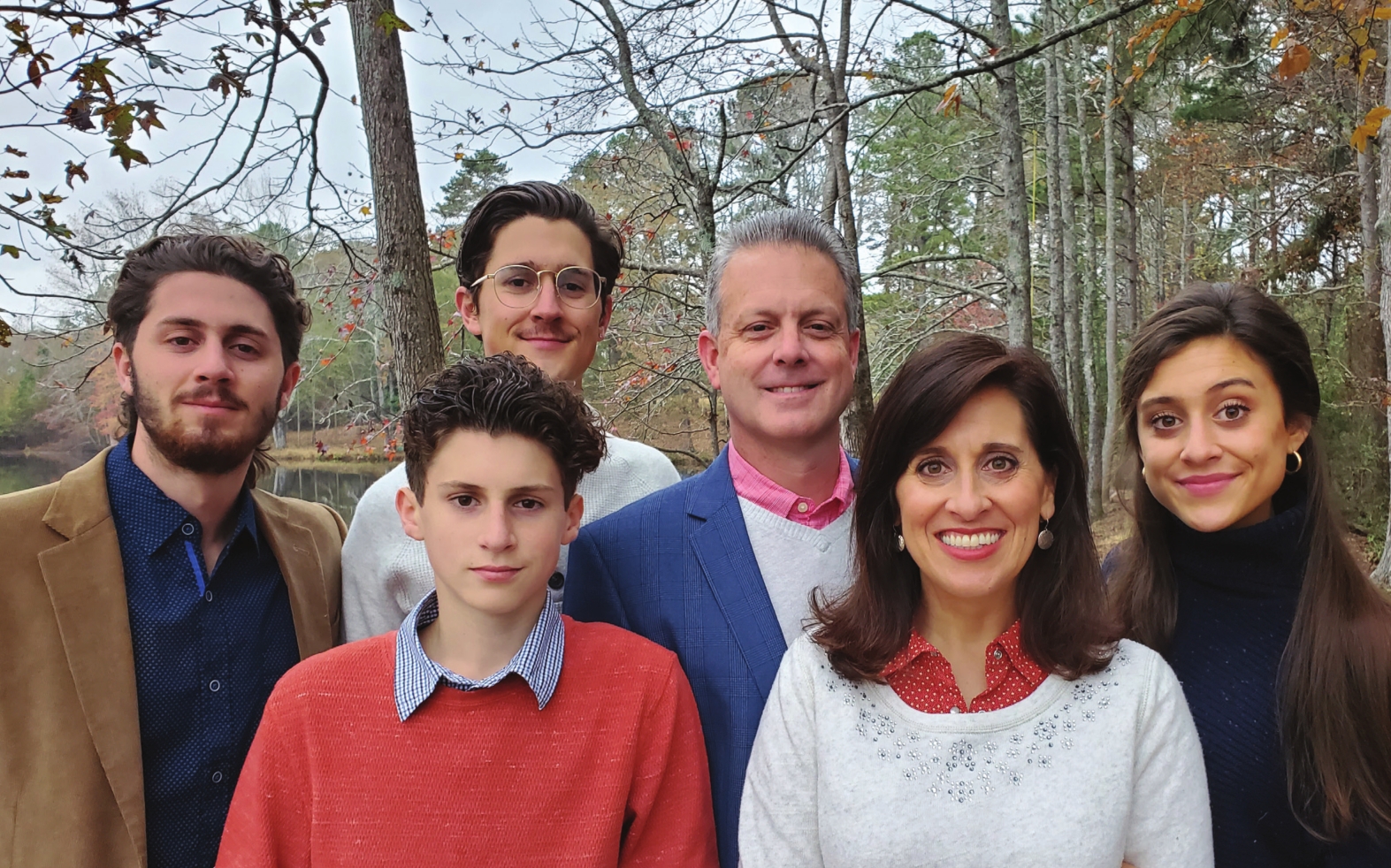 CHUCK AND STACEY WARBINGTON WITH THEIR CHILDREN WESLEY, WILL, TY AND RILEY

His daddy grew up living in the back of the family store, pumping gas for the customers and helping his parents stock and run the counter inside. Warbington Grocery was at the corner of Highways 124 and 324 in Hog Mountain and as a boy, Charles Warbington was living in a much different Gwinnett County than his son would someday see. Today, Chuck Warbington reveres the history and the old days of the county, but his name and his work are intertwined with its present and its future.

As city manager for Gwinnett’s county seat, Warbington oversees a budget of almost $200 million and 300 employees for the City of Lawrenceville. While he has been at the forefront, Warbington is quick to credit others—including city council members more than a decade ago—with much of downtown Lawrenceville’s renaissance. “The transformation started with previous city councils 10 to 12 years ago where there was an initiative and a vision to have more folks live in the downtown area,” Warbington said. “That was then vetted throughout the community and put together as a plan as to where that residential area would be. I’ve been on the implementation side. Over the past six years, we have implemented that plan with our elected officials.”

Warbington said the city tries to balance new growth and development while maintaining the historical community character that makes the area so special. For nine generations, his family has been part of Gwinnett County’s history, with his first ancestors coming to the area 196 years ago. “It’s an honor to be someone whose family has been here since 1826,” Warbington said. “I’m very proud of our community. Have we had some blemishes in our past? Absolutely. But our community continues to stay together, evolve and grow and I like the place we are today. Can we continue to evolve and grow? Absolutely. As someone who has deep roots here, I have great pride in saying my family is rooted here. I’m very proud of that.”

Warbington comes from a family of public servants. While he and his brother chose local government and politics, their parents’ career choices also put them in positions of service. Both parents worked for the federal government. His father, Charles Warbington worked in the General Services Administration and his mother, Betty Warbington, worked in geological survey for the U.S. government. His brother, Chad Warbington is a commissioner on the Albany City Council and their sister Charmen Simons lives in Snellville. His parents now live in Lawrenceville, but the Warbington family grew up in the Hog Mountain area. He said the house he grew up in is now the centerline of the new Sugarloaf Parkway Extension. If he lived in a house on that site today, Warbington said he would be living in Mountain View.

He went to Dacula Elementary, Dacula Middle and graduated in 1989, from Dacula High School in a class of 92 people. After graduation, Warbington attended Georgia Tech, where he was part of the 1990 championship football team. “It was one of those opportunities where I was in the right place at the right time,” he said. “The year we won the championship, I was a freshman and wide receiver on the team. It was a great experience to go through a championship season that was a surprise to the nation. Obviously as a team, it was a whirlwind opportunity to go through a championship, travel to a bowl game and play at that high level. I was a redshirt freshman...I did get in three games that year. They were all blowouts…” He was named to the Dacula Sports Hall of Fame.

“We’re a driven family and very logically minded,” the city manager said. “We get both of those from our parents. My Dad was always engineering things related to lawnmowers and cars. My mom was very driven in academics and studying. It comes from a family upbringing.”

Warbington is a registered professional engineer, having worked as a principal manager for a local architectural/engineering company, Pond & Co., for more than 13 years. He began the leadership of Gwinnett Village in 2006, directing the efforts in forming the largest Community Improvement District (CID) in the state that year. In 2016, Warbington was appointed city manager for the City of Lawrenceville. He is a graduate of Leadership Gwinnett and serves on numerous boards and organizations, including the board of directors for Quantum National Bank and the Atlanta Transit Link Authority. He is past chairman of the Gwinnett County Planning Commission, past president of the Rotary Club of Gwinnett and past executive board member of the Gwinnett Chamber. He was selected by the Georgia Engineering Alliance as Engineer of the Year in Private Practice in Georgia in 2003 and was selected by CE News as one of the “15 Rising Stars in Civil Engineering.” Warbington was also named “40 Under 40” by Georgia Trend in 2006. He was going through Leadership Gwinnett while leading the CID and said it “lit a fire in me” to get more involved in the community” and brought about a change in the trajectory of his life. He became only the second city manager the City of Lawrenceville has ever had.

CHUCK WARBINGTON WITH HIS PARENTS CHARLES AND BETTY WARBINGTON AT A GWINNETT HISTORICAL SOCIETY MEETING WHERE MRS. WARBINGTON WAS PRESENTED THE PRESIDENT’S AWARD.

Warbington and his wife, the former Stacey Riley will celebrate their 26th anniversary this year. Mrs. Warbington was Teacher of the Year last year at Hebron Christian Academy, where she teaches 8th grade language arts. They are the parents of Wesley, a 23-year-old UGA graduate with a degree in civil engineering who works in Austin, Tex. Their son Will, 21, will graduate from Berry College this summer with a finance degree. Daughter Riley, 19, is a freshman at Georgia College studying early education and Ty is a 10th grader at Hebron Christian Academy.

“We’re a close family and not only with our immediate family, but with my parents, her parents, and cousins,” Warbington said. “Family is important to all of us.”

At work, the city manager says he likes being part of a group that includes the city council and mayor that can work together to make decisions and changes to help the residents of Lawrenceville.

“I love being a part of bringing about positive change to a community,” Warbington said. “There is a lot of negativity I see on a daily basis and it can wear you down. But knowing you’re a part of the solution, that’s very uplifting and gets you up in the morning.”